I was fortunate enough to be able to attend drupal camp atlanta over the weekend. It was great! I was also able to attend the drupal business summit as well as drupal camp. They were both awesome and I learned quite a bit more than I expected to. Here are some of the highlights for me:

Keiran discussed the revolution side of drupal, how it’s played a hand in the world revolutions of late with the help of social media. It is great to see the drupal community making open technology possible to the world.

How Drupal is Transforming the United States Government – Jeff Walpole

This one was perhaps my favorite keynote presentation of the weekend, although it wasn’t all new to me. I was aware of the recent push of gov sites being built in drupal, especially the white house site. It’s a great case study to say, yes, open source is stable and secure and can be used effectively. This talk was interesting in that Jeff discussed drupal positioning and how gov clients are beginning to see the power of open source and developing components and contributing them back to the community. So for example, Georgia could have a site for the state congress and develop a certain functionality, they would then release it back to the community and with a bit of extra work, New York state could implement the same component on their site with little effort. That is a beautiful thing in these days of budget cuts. He is an expert on the topic as well and has written quite a few articles about drupal and .gov sites: Drupal: The New Gov 2.0 Site Builder? and 5 government sites using Drupal effectively for open government initiatives and even State of Georgia Making the Move to Drupal Using OpenPublic

Ryan discussed more the process he and his international team have gone through to progress on this project. He has his roots with UberCart, and with this new venture he’s focusing more on an ecommerce drupal framework for ultra flexibility rather than every option out-of-the-box. Very impressive so far! E-commerce is one area from my experience where there really is no great solution in the Open Source Software world. Magento? e-commerce plugin for WordPress? meh. 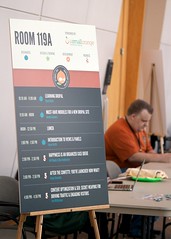 Think Like a Drupal Developer – Erik Webb – A great way to start the day, getting insight into the why’s of drupal helped me understand other issues throughout the day. Erik set us up with a good base to jump from.

Introduction to Views and Panels. Or, How views and panels will change your life. – Jason Smith – A great insight into the power of views and then panels, code reuse is a marvelous thing.

One Theme to Rule Them All! – Geoff Maxey – This was a presentation about having one theme for desktop and mobile viewers. Using responsive web design techniques to adjust the layout depending on the screen size. A little trouble with the demo, but those things happen.

APB are the guys who organize public speakers, whoever you saw speaking at the last graduation or other ceremony was probably done through the American Program Bureau. They have connections! Many many people, from movie stars, to famous writers, to nobel peace prize winers! So for your next party, give them a try. They had a really old website from about 1999 or so. I was involved with rebuilding it! I did most of the html/css design and flash/actionscript. They just launched the site this week, so I’m just celebrating with this post!

See before and after images below:

These are the mock ups, all html/css and the we pushed it into drupal for content management.

APB had the final say on the finishing touches. It came together, although I was suprised that they opted to put so much movement on the page. We set it all up so all speakers have images and videos on their page all in the custom player we built for them… but then they go and embed a youtube video on their homepage… go figure. It came a long way though. Go Web 2.0! Visit American Program Bureau.

Site built for Going Natural 3, free series of videos to promote the re-opening of StomperNet. Includes flash video and html template design in drupal all styled with custom made themes and css. Users were prompted to subscribe with email address and then allowed to view the premium video content and comment. Site discontinued, but video content still available at stomperblog.

Here’s a new site and series from StomperNet called Going Natural 3!
It’s a bit of free videos made and released to showcase the talents and business of what StomperNet is about and what they do for their clients. They’re ‘moving the freeline’ so to speak…

The first video series begins with Dan Thies talking about his ‘Crazy Theory’ for AdWords.

On signing in there are a couple BONUS videos for you as well. So go check them out as well!
Watch Going Natural 3 – Adwords Triangulation Method and more

This site contains the latest flash video player built by yours truly. I also did the design of the site: involving html, css, php, javascript and dealing with drupal too!

is the new public (free) website from StomperNet. I helped implement this design and had to learn all about themes in Drupal. It’s still in beta, but it’s well on it’s way. It is an agglomeration site, where all the StomperNet Faculty’s feeds can be found and various other free content, like video in the Squambido player, and the Scrutinizer software.

I’m happy to be contributing to the WordPress community as a speaker at WordCamp Atlanta 2018. I submitted a few topics and have been selected to speak about development process for teams. Here’s the short description: Overview of some processes used at an agency level. Version control, code standards, database migrations, environment aware config files […]

Turning the page I’ve joined 10up as a Front End Developer. 10up is a leader in the WordPress industry as an elite WordPress agency (with clients like Microsoft, Time, ESPN, and Adobe). While speaking at WordPress conferences among a few 10uppers, I heard more and more about the distributed agency and I heard they had an opening. […]

I am speaking this weekend in North Carolina at WordCamp Wilmington. I thought I had posted this weeks ago, but apparently not, so as I finish my slides for the talk, I’m also announcing that I’m giving it. I have never been to Wilmington and am excited to check it out! I was asked after […]

I’m pleased to share that I’ll be speaking at WordCamp Asheville, not once, but twice! I’m presenting an Intro to Web Development for beginners as well as a lightning talk about Modular Web practices for WordPress. My first talk will be the same as the one I presented at WordCamp Raleigh, but after having presented […]